Music: Count Us In (MCUI) is Australia’s biggest school initiative, with more than 750,000 participating students from over 3,400 schools nationwide. Growing in reach and impact since 2007, the MCUI program exists to support teachers to deliver music in the classroom, addressing a lack of training and experience in this specialist area. Each year students from all over Australia submit their original songs to MCUI’s songwriting competition, with the winners given the opportunity to professionally write and record an original song. This song is then performed hundreds of thousands of Australian school kids on Celebration Day.

2020 is the 9th year the Why Music Matters campaign has collaborated Music Australia to provide a resource for the MCUI program. We worked with a local animator to bring the song to life through an original short animated film. This year we worked with William Gembitsky to create an animated music video for “You Won’t Bring Us Down”.

William is a Sydney-based animator and editor, specialising in character animation and sleek motion graphics, with a penchant for funky sunglasses. You can find more of William’s work on his website.

Music: Count Us In song for 2020
“You Won’t Bring Us Down” lyrics and score were written by Australian students Eve Cooper, Greta Lynch, Trent May and Ava Sharp. The students received guidance from the program’s ambassador and award-winning producer John Foreman OAM, and this year’s music mentor, Australian artist Lior. 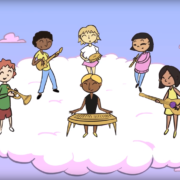 If you know of any animators who would be interested in producing an animation for us, please let us know!